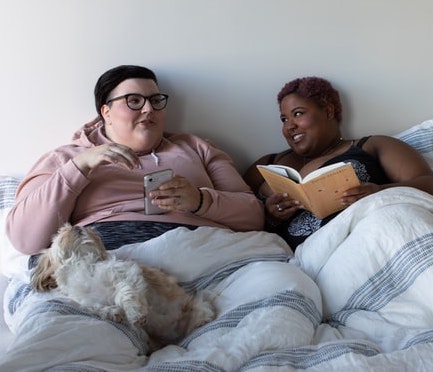 This adage is at the core of what we do here at PbK. Its a more crass version of “find freedom in pleasure” but both share the same sentiment:

The only one who gets to decide what it means to have an intimate, exciting, and fulfilling sex life looks like is you.

How often you have sex, what sex acts you engage in, which you enjoy, who you have sex with, how you identify—we all grew up with messages from our families, friends, school, religious groups, other communities we were apart of, media, and society at large (in the form of norms and laws, among others) about how we “should” do any of these. And it takes exactly half a second to find thousands of blog posts, articles, and even research studies giving their opinion on the topic too.

But none of those people are YOU.

Tuning out the noise of others’ opinions isn’t easy.

First, it isn’t always safe to do so. There are very real barriers and risks to showing up fully as yourself—in life and in relationships. Racism, sexism, ableism, fatphobia, homophobia, and transmisia are alive and well in our world today. They are baked into the fabric of our society (at least in the US), driving everything from laws to company policies to individuals’ behaviors.

Secondly, there’s shame. Which, of course, comes from shoulds and expectations about how to live, love, and fuck. Between humans’ negativity bias and the lies shame tells us about us being alone in our struggle and not needing to share, it’s easier to notice messages about who we are and what we want being wrong than ones that affirm.

Lastly, most of us aren’t consciously aware of the stories we have about what “good” sex looks like. Most of the work I do with my sex coaching and couples counseling clients comes down to this one simple act: breaking free of old, shame-filled stories and beliefs about what an intimate, exciting, and fulfilling sex life looks like. Stories that often my clients aren’t even aware of until we start looking at the messages they received.

They feel stuck in a rut in their lives and relationships (if they’re in them) and that’s showing up as self-doubt, low libido, frequent arguments, struggles to orgasm, lack of sex and other intimacy, questioning their relationship or themselves, and much more.

Once they understand those messages and how they’re playing out in their lives today, they’re have the agency to decide whether or not they want to keep believing them. And those sex issues they often came to see me for start to resolve, seemingly on their own.

It’s in letting go of the shoulds that freedom comes.

While the greater world has a lot of catchup to do when it comes to acceptance, inclusivity, and liberation, that doesn’t mean you can’t start by giving those to yourself.

Ready to decide what does (and doesn’t) go down in the bedroom?

You’ll get three of our most popular digital tools to guide you from thinking to doing. Start your journey to finding #freedominpleasure now.

2 thoughts on “Homophobia, Racism, Fatphobia, and Other Barriers That Impact Your Sex Life”